Congratulations To Everyone Who Finished Brooklyn - See The Results Here! ✕

Why Your Watch & Phone Are Lying To You

After almost any race we put on, there are customer service questions to address. Most are pretty mundane, but one is super interesting and information every runner should know, “Why did my GPS device say I ran X miles when the course was supposed to be Y?”

The simple answer is that your GPS is usually wrong. GPS is not accurate enough to measure a course the way a professional measurer does.

Believe it or not, GPS was not designed to measure race courses. It was actually designed, at least in part, so that military personnel could figure out where they parked their tanks, but like many military applications was repurposed for consumer use in a variety of ways. The internet is another great example. In practice GPS tends to be long, which can be super frustrating if you are at mile 13.2 of a half marathon and the finish is a blur a 1/4 mile away!

I think I can speak for race directors and course measurers everywhere, when I say it would be wonderful if GPS were accurate enough for course measurement, but it’s not. Instead, we use an arcane method of measurement that involves a bicycle, a device that attaches to the front wheel called a Jones Counter, and a lot of time and effort to ensure that when we put on a race, the course was measured using the shortest possible route. Most of the time we submit this measurement to USA Track & Field (USATF) for certification, which makes it publicly available. 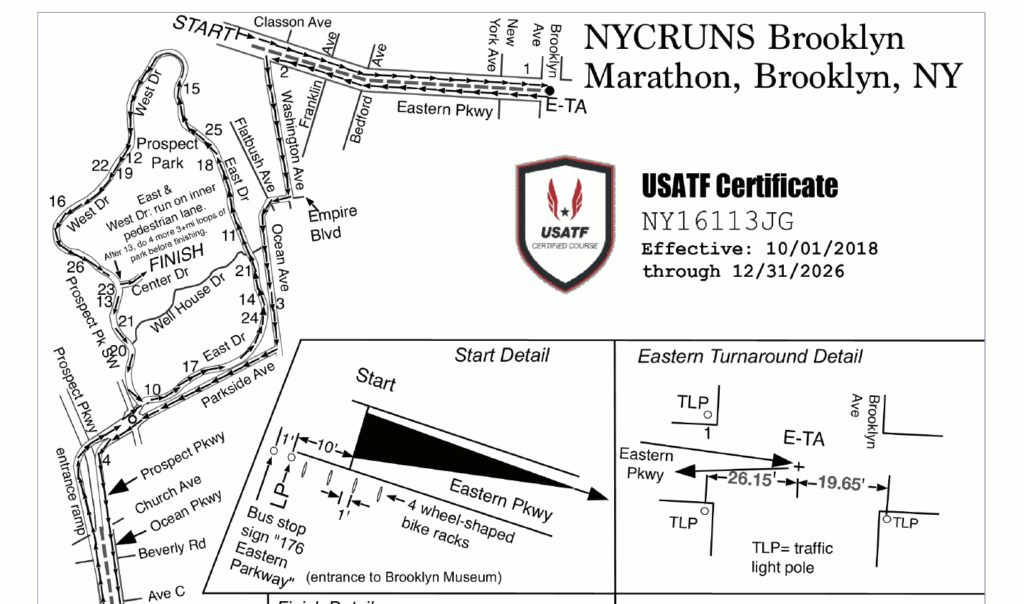 At NYCRUNS, we measure all courses using the process mandated by USATF. However, we don’t certify every single course we measure. Marathons and almost all half marathons are almost always certified. These races are frequently used to qualify for other races, so in addition to accuracy, certification is important. The only notable exception to the half marathon rule are races held entirely in Flushing Meadows Park, where we tend to vary courses exceptionally to deal with weather and construction, and there are also some endemic challenges.  If a half marathon is not certified, we say that explicitly on the race page.

As for shorter distances, we only certify these if we feel we will use the course repeatedly, or if there is another extant reason to do so. If we feel like a course is one and done, or we just might not be sure about it being used again, we’ll often forego certification due to it being a time consuming process for all concerned. While the measurement process is not foolproof, it is very reliable and the most important part of the exercise. Having competent measurers on The Team is a huge boon, believe me. It allows us the luxury of fixing late arising problems, like emergency construction.

Back to you and your GPS. In practice, it’s nearly impossible to run the shortest possible route.  When you run, you move side to side, weave around runners, swerve towards the water tables, and occasionally use the potty! That said, despite what your GPS says, when you run a race with us, you can be sure the course is as accurate as we can make it.